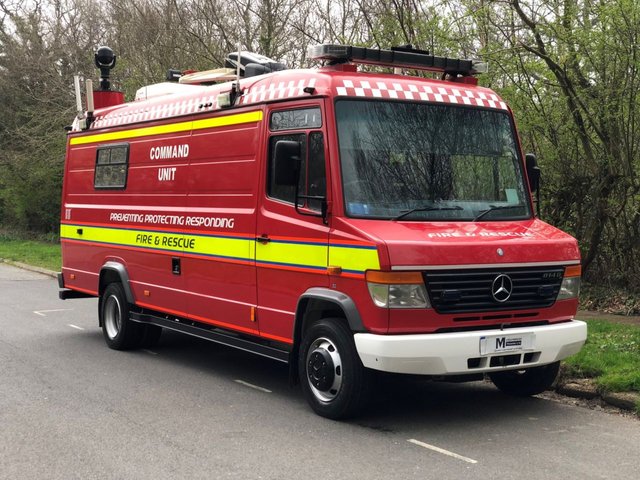 2003, It still retains all of its features and nothing has been removed. It consist of: Fisher Panda diesel generator with electric start from interior control board coupled with a full Antares electrical system with power inverters, chargers ect, 240V Mains electrical intake, A fully functional Forward Vision CCTV system take consist of: Clarkes mast coupled with video camera dome which is can be raised to a height of 4.8 meters, JVC TV screen, Full keyboard system with joystick for manoeuvring the camera and zooming, it also has a auto focus feature and rain wiper, It also has several CCTV recording devises, A Teklite lighting system with Clarke mast which can be raised to a height of 4.8 meters and can be maneuverer from interior control panel, Excelerate satellite dish which can be raised and lowered and is capable of opening a secure phone line and internet coupled with a Stryker data transceiver, Domestic roof mounted heater and air con unit,

Get the best deal on a used Mercedes-Benz Vario van for sale in East Grinstead by making your way to McGuinness Trading Ltd today. You will find every available model listed here on the website, and as all our stock is competitively priced you should have no problem sourcing a pre-owned Mercedes-Benz to suit your budget. Take the opportunity to browse our current range online before contacting a member of the showroom team to find out more. Our friendly and knowledgeable staff will be more than happy to answer any questions and provide advice and guidance when necessary. Alternatively, why not pay a visit to our showroom in person and take a closer look at the selection of used Mercedes-Benz Vario models for sale.

Every effort has been made to ensure the accuracy of the above vehicles information but errors may occur. Please check with a salesperson.

The representative finance examples shown above are for illustrative purposes only. Fees, rates and monthly payments may change subject to underwriting decision.

*Fees are already accounted for within the payments displayed and are included within the total amount payable.

Finance is available to UK residents aged 18 years or older, subject to status. Terms & Conditions apply. Indemnities may be required. Other finance offers may be available but cannot be used in conjunction with this offer. We work with a number of carefully selected credit providers who may be able to offer you finance for your purchase, commission may be received. We are only able to offer finance products from these providers. Postal Address: McGuinness Trading Ltd, 71 Copthorne Road, Felbridge, East Grinstead, West Sussex RH19 2PB. Find contact details here.

Search for a vehicle